Noted collectors for several decades, the Wearts also authored ‘Cast Iron Automotive Toys,’ a now-classic reference book about a category that was of particular interest to them

VINELAND, N.J. – On September 8-9, Bertoia’s will auction the antique toy collection of the late Bill and Stevie Weart, a couple whose contributions to the toy hobby were immense. Anyone who ever had the privilege of visiting the Wearts at their magnificent home in Allentown, Pennsylvania, was left with the impression that they had witnessed something exceptional for these times. Their gracious three-story residence, which was situated in a tranquil parklike setting, visually reflected what was most important to them in a home: fine architecture, tasteful furnishings, a garden that beckoned wild birds, and most of all, an interior design plan that prioritized the display of their spectacular toy collection.

In every room on every floor, there were custom-built showcases. Bill, a former executive engineer with Ford Motor Company, designed them solely to accommodate their precious toys. He also designed and crafted remarkable scale models of historical residences, furnishing and outfitting each of them so they functioned just as real houses would.

Bill and Stevie appreciated all sorts of antique playthings: European and American tin, automotive toys, Marklin boats, airplanes, trains, banks, dollhouses, candy containers, and especially cast-iron toys. They had an eye for whimsy and would incorporate toys into their decor with a subtlety that was delightful, for example, placing a George Brown toy atop the opened pages of a George Brown Sketchbook where that very model of toy was illustrated.

The Wearts, themselves, left a literary legacy in the form of a book they co-authored in 2000. Titled Cast Iron Automotive Toys, it is still regarded as the go-to reference by cast-iron toy collectors.

The American cast iron category is amply represented in the auction lineup, with selections by Arcade, Dent, Hubley, Kenton, Wilkins, and Pratt & Letchworth; and even rarities of unknown manufacture.

An extremely attractive, all-original 22-inch-long Hubley horse-drawn Royal Circus Bandwagon displays bright paint and excellent detail. As nice as any collector could hope for, this classic American toy is expected to make $7,000-$12,000. Also in the Hubley toy menagerie, a reduced-size (11½-inch) Lion circus wagon in near-mint condition is estimated at $2,500-$4,500.

Two oversized Dent firefighting toys in pristine to near-mint condition are sure to inspire multiple bids. A 32-inch-long Hook & Ladder carries a $3,000-$5,000 estimate, while an all-original 25-inch-long Fire Pumper aims for a winning bid of $4,000-$6,000. Of the same genre, a 16-inch-long Harris (Toledo, Ohio) Fire Hose Reel, with strong paint condition and excellent casting effects throughout, could race to a $3,000-$5,000 finish. Also in the spotlight is one of few known examples of a Kenton Moran Crane, which is shown in the manufacturer’s 1932 catalog. Estimate: $5,000-$7,500

Early European toys cross a broad spectrum of manufacturers, including Distler, Fisher, Stock, and Lehmann. Characters from the latter manufacturer include Paddy and the Pig, and Mikado Family. Each retains its original box and has a pre-sale estimate of $1,200-$1,800. Also, the lineup includes a Doll et Cie., 18-inch live-steam touring car, $2,500-$4,500; and a hand-painted, “plunking” Gunthermann Monkey Training Goat Rider in excellent to pristine condition, $2,000-$4,000. Several fine productions by the German manufacturer Gottschalk will be auctioned, including a 22-inch three-story warehouse, a red-roof dollhouse with porch, and a horse stable/barn. German railroad lots include a Marklin 1-gauge passenger train set with a 14-inch locomotive, $3,000-$5,000; and an early Marklin trackside crane, $2,000-$3,000.

Bertoia’s September 8-9, 2022 auction of the Bill and Stevie Weart antique toy collection will take place at the company’s gallery located at 2141 DeMarco Drive, Vineland, NJ 08360. Live attendance is limited and by reservation only, with masks and social distancing mandatory. In-gallery previews are by appointment only. Bid absentee, by phone, or live online through Bertoia Live or LiveAuctioneers. For additional information, to reserve a seat at the gallery, or to make an appointment to preview the collection, please call 856-692-1881, email toys@bertoiaauctions.com or visit Bertoia’s online: www.bertoiaauctions.com. 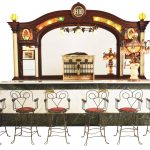 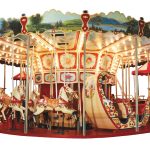