PICTURED IS A 4.8-inch broom introduced by Renwal in 1950 and offered as a doll house accessory item. It is the earlier of two versions that the company made. Both were numbered and named as their “121 BROOM”. The broom is marked “RENWAL U.S.A” on the red broomstick and is an example of an earlier version.

A very good friend, Charles “Chuck” Donovan wrote two books covering Renwal items. Regarding the broom he wrote: “This is arguably the rarest and most sought after piece of Renwal doll house furniture, and when found the bristles have usually deteriorated.” 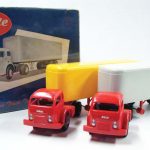 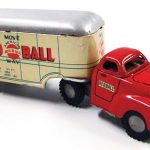