UNLIKE A NUMBER OF U.S. toy makers, Hubley did return to toy production after WWII. By 1948 the company was beginning to introduce its newly designed toys, items that were not carry-overs from 1941-42.

Included were three new toy sets, and their #30 Fire Department was one of the three. That set consisted of four toy vehicles plus accessories as follows: 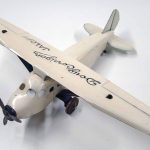