WILLOUGHBY, Ohio – The multifaceted collection of the late Mark Smith was the cornerstone of an exciting $613,000 event held at Milestone Auctions’ suburban Cleveland gallery on October 15th. Smith, a Virginia businessman, was a passionate and very hands-on collector of automotive advertising and memorabilia, a reflection of his involvement in the car industry. But there was much more to Smith’s collecting interests than just motoring, said Miles King, co-owner of Milestone Auctions.

“Approximately 500 lots in the 740-lot auction came from Mark’s collection, and the variety showed very clearly that he didn’t place any restrictions on what he bought. He had a great eye and excellent instincts. If something appealed to him, he bought it. He was also very shrewd about buying up rare car and motorcycle parts, which only grew in value over the years. In the run-up to the sale, our phones rang constantly with inquiries about those parts.”

Sleek classic cars grabbed their share of attention at the well-attended preview. A 1936 Packard 1407 Coupe with classic Art Deco styling was complete with a V12 473-cubic-inch 175hp engine and original 3-speed transmission. It boasted a clean, straight, Dietrich-style body and a kicky rumble seat. The 86-year-old luxury ride had obviously been pampered, as its odometer reading was only 64,033 miles. Prior to the auction, King remarked that the engine purred so smoothly, it could barely be heard. It was no surprise that the head-turning beauty, accompanied by an extensive assortment of extra parts, commanded a within-estimate winning bid of $140,400.

A car that captivates collectors today even more so than it did in 1956, a Chevrolet Corvette C1 Convertible raced to an above-high-estimate price of $78,975. It was one of only 3,467 of its type produced in 1956 and showed an odometer reading of 94,681 actual miles. The car was a good-looking older repaint that had acquired a desirable natural patina over time. The attractive red interior was a match made in heaven for its black and silver exterior.

Vintage automotive and motorcycle parts, which received bids from all over the United States, were led by a single-cylinder cutaway motor for a 1916 Model K Indian motorcycle. With its condition graded a remarkable 9 out of 10, the antique part sold for $6,000 against a broad estimate of $100-$10,000.

Mark Smith’s amassed an extensive collection of rare racing signs and advertising. The top lot from this grouping was a canvas banner emblazoned “1940 Studebakers” and illustrated with checkered flags. “This banner was especially desirable because of its outstanding condition (graded 8.75 out of 10) and the fact that it was so complete. It even had its original shipping box,” said Miles King. The banner sold for $8,100 against an estimate of $100-$10,000.

The competition amongst collectors continued as a 1930 Goodyear Second Annual Zeppelin Race Winner’s Award with repousse images of zeppelin, cars, and other modes of transportation knocked down $3,000; to be followed by a Bosch (racing) Equipment hood ornament in the form of the company’s mascot, a goateed and goggled red devil wearing a racing hat. All original, it sold for $2,760.

From the undersea world, two hand-crafted inhabitants emerged to inspire aggressive bidding and excellent prices. A unique and nicely patinated 24-inch-long fish weathervane/lightning rod made of lead with copper fins was a prize catch at $5,640. Another “whopper” was the cast-metal trade sign advertising fishing tackle and which displayed a 22-inch-long fish suspended from an ornamental bracket by two chains. This handsome fellow took the bait and was landed for $3,960.

The wide array of antique and vintage advertising incorporated many modes of transportation. A nautical entry with historical importance was the original circa-1910 advertising sign for Cunard Lines’ RMS Mauretania. The colorful self-framed tin sign, 39 by 28 inches, bore a stately depiction of the Mauretania, a vessel that was the sister ship to the RMS Lusitania. In glossy, very fine condition, the sign sold near the top of its estimate range for $3,600.

After the sale concluded, Miles King remarked that he felt the auction would have pleased Mark Smith, who was well known in automobilia and antique advertising circles. “The things he loved and displayed so proudly during his life ended up in the hands of fellow collectors who will, in turn, respect and enjoy them. We made it our mission to represent Mark’s collection in a way that paid tribute to his lifetime of collecting achievement.” 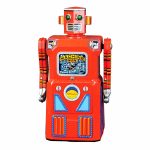 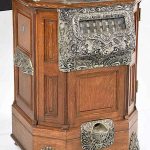