Considered the ultimate catch in its category, boxed Popeye and Olive Oyl Tank could reach $30,000-$40,000 range

WILLOUGHBY, Ohio – That swaggering, wisecracking cartoon sailor Popeye has been depicted on countless toys and memorabilia since first appearing in the Thimble Theatre comic strip in 1929. With his spinach-powered superhuman strength, he was an immediate hit with readers of all ages, gaining an even higher level of visibility in his own cartoon series that launched in 1933. Ever since his debut, Popeye – with his girlfriend Olive Oyl and their motley crew of sidekicks in tow – has been an entertaining figure in the public’s consciousness, and vintage toys designed with Popeye’s image have only continued to rise in popularity and price.

On Saturday, April 9, Milestone Auctions of Willoughby (suburban Cleveland), Ohio, will offer one of the finest selections of Popeye toys ever to reach the marketplace, led by the greatest rarity of them all: a Popeye And Olive Oyl Tank with its original pictorial box.

“Every major collector of Popeye toys – and just about every collector of comic character toys, in general – wants that tank,” said Milestone Auctions co-owner, Miles King. “The minute word got out about it, the phones started ringing and collectors started searching for it in the online catalog.”

Made by Linemar (Japanese post-WWII subsidiary of Louis Marx & Co), the 11-inch-long battery-operated Popeye And Olive Oyl Tank is in excellent to near-mint condition and is easily the nicest of few known examples. It is all original and complete, even retaining Popeye’s pipe and the red plastic caps that hold his legs to the tank. When activated, Olive Oyl’s head emerges from the cupola with a surprised expression on her face, as Popeye flips the tank over. The toy’s battery box is immaculate, and when tested, the tank worked well. The piece de resistance, however, is the crisp, profusely illustrated original box that accompanies the toy. On auction day, bidders will be guided by a $30,000-$40,000 estimate, with a required opening bid of $20,000.

Popeye is more than just a sailor who attracts misadventure, as is apparent in the auction’s 60+ rare toys with his image. He’s a man of many accomplishments: a pilot, as seen in Linemar’s Mechanical Popeye Air-O-Plane with original box, estimated at $6,000-$8,000; a strongman hitting a carnival bell in Chein’s Popeye Heavy Hitter, boxed and estimated at $5,000-$6,000; and a gymnast in Linemar’s Popeye Acrobat, boxed and offered with a $4,000-$6,000 estimate. In addition, he’s a scrappy pugilist, starring in Chein’s wind-up Popeye Overhead Puncher, boxed, $4,000-$5,000; and the same manufacturer’s wind-up Shadow Boxer, boxed, $3,000-$4,000. A super example of a boxed Linemar battery-operated Popeye And Rowboat, complete with oars and correct remote control, carries a $2,500-$3,500 estimate.

Milestone has earned a reputation for selling some of the most coveted antique and vintage toy motorcycles. Last October, their $768,000 toy auction drew a global contingent of bidders who competed aggressively over a collection of 138 super-clean bikes. Among the leaders were two Marx prototypes that each sold for $22,800. More beautiful Japanese, American and European motorcycles and scooters are lined up for the April 9 auction, including a Hubley (American) 9-inch cast-iron Indian solo motorcycle with a civilian driver, original Indian decals and original pull cord, $2,000-$3,000; and a Georg Levy (German) tin wind-up double rider motorcycle with sidecar, $1,500-$2,500. Fans of Japanese postwar tin friction bikes will instantly recognize the large (12-inch version) “Romance” motorcycle with a male driver and female rider. Like the Levy bike, the sought-after Romance will cross the auction block with a $1,500-$2,500 estimate.

The American cast-iron section includes several interesting “transitional” toys, so named because they reflect the design changes of the period when horse-drawn vehicles were phasing out in favor of motorized types. Three Hubley productions are included in this group: a fire ladder truck, water tower fire truck, and fire pumper with a boiler. Each is expected to make $2,000-$2,500 at auction. An oversized (27-inch-long) Kenton fire pumper has all of the necessary parts intact, including two jaunty 11-inch horses, two firemen figures, white rubber hoses and brass fittings. In excellent condition, it is entered with a $2,000-$3,000 estimate.

For those who like high style, there’s a 1920s Steelcraft Packard Deluxe pressed-steel pedal car, 49 inches long and in 100% as-found condition. “Only a privileged child could have owned this car,” Miles King observed. “It has a klaxon horn, spotlight, colored marker lights, dash gauges and license plates. You won’t find a better or more original example.” Estimate: $6,000-$8,000. Another delightful 1920s Steelcraft production, a 49-inch “Little Jim” Air Mail pedal airplane could land at $3,000-$5,000.

Pressed steel highlights continue with a very rare 26-inch American National Coal Truck with electric headlights. All original, it has that great primitive look that collectors go for and is hard to find in any condition. It should fetch $3,000-$5,000. The category boasts 90+ vehicles in total – many of them boxed – encompassing automobiles, airplanes, buses, moving vans, wreckers, fire, delivery, livestock, military and construction trucks; and much more. In addition to American National and Steelcraft, brands represented in the mix include Buddy ‘L,’ Sturditoy, Turner, Keystone, Cor Cor, Marx, Les Paul, Wyandotte, Sonny, Dayton, Tonka and others. 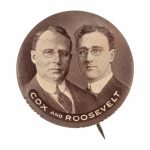 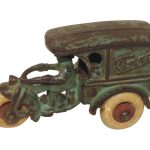