Pedal cars took the lead, with an American National Deluxe Coupe with luxury appointments cruising to $66,000

WILLOUGHBY, Ohio – Milestone Auctions gave collectors what they wanted on September 24th, rolling out a diverse offering of antique and vintage toys from the Mark Smith collection along with high-quality additions from several other consignors. The 755-lot sale was active from start to finish, with many international bidders taking part. After a long but rewarding day at the podium, auctioneer and company co-founder Miles King closed the books at $505,200 (inclusive of buyer’s premium).

Variety was the watchword for this auction, which ran the gamut of today’s most popular toy categories, including motorcycles, racers, American cast-iron, tin and pressed-steel vehicles; German and Japanese postwar battery-ops, gas-powered tether cars, and more. Many elusive examples were in the mix, and a healthy percentage came with their desirable original boxes.

Rare pedal cars from the early days of motoring dominated the day, with a swanky American National Deluxe Coupe pedal car in the lead. Boasting every possible luxury option, including opening doors, sliding windows, a dashboard with simulated gauges, and interior upholstery and curtains, the 68-inch car was presented with a $20,000-$40,000 estimate. Well aware of its rarity, collectors pushed it to a final price of $66,000.

Another scarce production was the early, all-original Gendron chain-drive Packard pedal car with a steel body and wood radiator, tires and frame. Its paint was 100% original, and it was so complete, it even retained its Gendron Wheel Co factory decal. Against a pre-sale estimate of $8,000-$12,000, it glided to a stop at $24,000.

Big boys love their Buddy ‘L’s. With their hefty pressed-steel construction and authentic look, they’re classic automotive toys and never have a problem finding a new owner. A scarce Buddy ‘L’ 1-ton Express Truck with original black paint, red spoked wheels and factory decals came to the podium with expectations of landing in the $1,000-$1,500 range. But fueled by aggressive bidders, the 14-inch-long “flivver” put it into overdrive and sped to an impressive $7,200 finish.

More than a dozen gas-powered “tether” racers were offered. The cars gained their name from the fact that, before the days of being raced on tracks, they were raced one at a time while tethered. Such racers enjoy a fanatical following, said Miles King, because they’re “as close as you can get to feeling like you’re a professional driver without actually being behind the wheel.” Many bidding cards were in the air for a 17-inch-long Domo Maserati gas-powered tether racer in wonderful all-original condition. Made in Trino, Italy, and exhibiting the modern Italian styling of its period, the racer crossed the finish line at $6,600 against an estimate of $2,000-$4,000.

All original and never played with, a beautiful Kingsbury wind-up Golden Arrow Racer with its original pictorial box had another exciting bonus: the original factory tag with an image of Major H.O.D Segrave. The toy authentically replicates the streamlined racer driven by Major Henry Segrave in March 1929 when he broke the world land speed record at Daytona Beach, Florida. Clocking at 231.45 m.p.h., Segrave beat the existing record held by American Ray Keech and won a new distinction for his native United Kingdom. Ninety-three years after its release, the Golden Arrow toy racer still charms collectors. The example at Milestone’s sale commanded nearly twice its high estimate, selling for $1,980. Another Kingsbury production that found favor was a pressed-steel clockwork wrecker truck in never-played-with condition. It sold for $3,000.

Rough-tough construction toys of the postwar era are seldom seen at auction in all-original, unplayed-with condition, but there were several that met that description in the September 24 sale, and they attracted strong bidding. An Ideal Fix-It Tow Truck, complete with parts, tools and its original box sold for $1,260 against an estimate of $300-$500; while a Marx battery-operated 18-inch-long Giant Bulldozer, new/old stock in its still-sealed original box, realized $4,920, which was more than 12 times the high estimate. A flawless Tonka #103 3-piece Fire Department set with accessories and its original box garnered $900 against a $200-$400 estimate.

The auction was full of nice discoveries, like a vintage Clarke Troller 1.3hp toy outboard motor made between 1938 and 1940. All original and unusually complete, it retained its correct carrying case, manual and accessory box. Against a $1,000-$2,000 estimate, it pulled into port with a winning bid of $5,040. 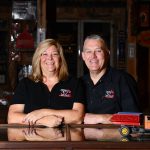 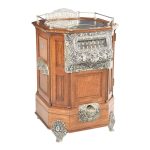