IN THEIR 1932 FACTORY CATALOG Tootsietoy introduced twenty-five new toys. That group included a new No. 4666 Racer which the company touted as being “An exact reproduction of the ‘World’s Fastest Racer’.” Tootsietoy was referring to Sir Malcolm Campbell’s Bluebird which had set the
and speed record on Daytona Beach in 1931. 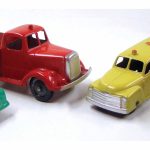 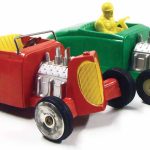